A good day on the water depends on preparation before heading out.

It is a good idea to plan your trip and to check all your gear prior to leaving home.  There are some useful check lists to aid you in your preparation. Don’t forget to include your crew in your trip preparations. The more you do before you head out on the water will make your day more enjoyable.

If you’re new to boating, remind yourself of these items

Sometimes we take the condition of our boat and gear for granted.

This comprehensive check list covers most areas of all boats of various shapes and sizes.

We urge everyone to make a copy and spend some time going through the check list to ensure their boat is up to scratch.

It may also be a good idea to copy and enlarge the outline of the boat, write on it the location of your safety and other gear, then laminate it and mount it on the bulkhead.

This would be a reminder to all on board regarding the location of important safety gear and other mechanisms on a boat.

Going Boating?  Use this checklist before you depart!

Good weather is critical for a safe and enjoyable trip therefore it is important to always obtain an up-to-date weather forecast before going boating.

A weather forecast will include information on wind direction and speed, as well as the state of the sea and swell.  If the weather is not suitable, cancel your trip.

Routine forecasts and observation reports for coastal waters areas within 60 nautical miles of the coast and larger inland lakes are issued twice daily.

Warnings are also issued whenever strong winds, gales, storm-force or greater winds are expected, and are renewed every six hours.

There are many ways of obtaining an up to date forecast for any of the Tasmanian Coastal Waters areas and the larger Central Plateau and South West Lakes.

The Bureau of Meteorology issues forecasts for all these regions twice daily at 5.00am and 4.00pm. 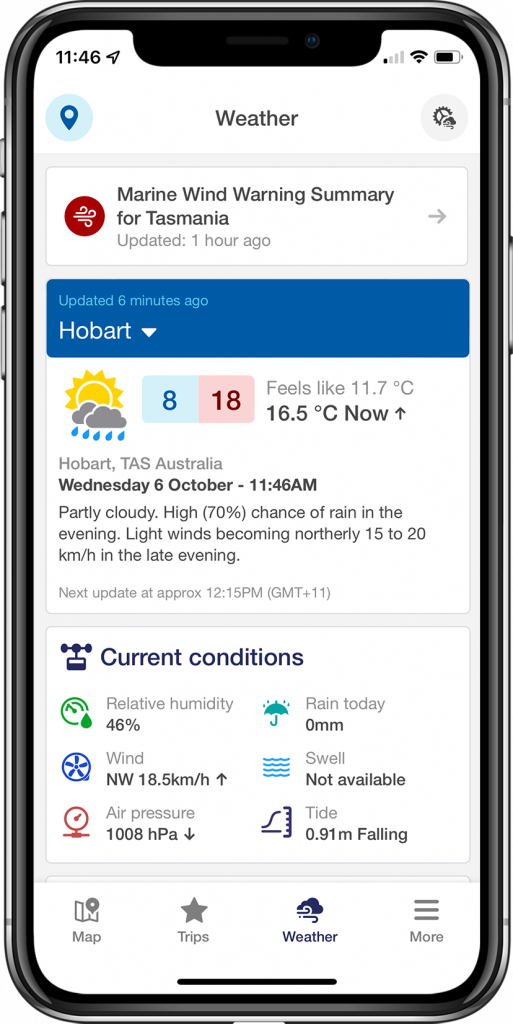 Forecasts on this system are updated twice daily. The service is the cost of a local call and you can get a forecast for your area by dialling one of the numbers listed below.

The Bureau of Meteorology Phone Service

Save these numbers into your mobile phone.

The ‘Meteye‘ system allows you to easily search for your local weather data, save your favourite locations and combine the latest weather and forecast weather on one map (rain radar, cloud, temperature, rainfall, wind, waves).

The Bureau of Meteorology also has a new mobile weather website for smartphone users which is a condensed and reformatted version of the full Bureau website, customised for small screens.

The mobile site URL is m.bom.gov.au.

Current weather forecasts are available via VHF radio. Volunteer coastal radio stations broadcast forecasts at particular times and can provide a forecast upon request at any other time.

Warnings and forecasts are broadcast by these groups on both VHF Channel 16 and 67.

Wind direction is given in 8 compass points for forecasts and 16 for observations and is the direction the wind is coming from.

Wave height is the vertical distance between the top of the crest and the bottom of the trough.

Gusts may be up to 40 per cent stronger than the average speed.

A squall is an abrupt and large increase of wind speed with a duration in the order of minutes which diminishes rather suddenly.

King/Freak/Rogue waves occur when wind waves and/or a combination of swell waves join to produce a very high wave. These waves can be much larger than the significant wave height.

Coastal waters wind warnings issued by the Bureau are categorised as follows :

Note: Wind speed is a ten minute average and gusts may be up to 40% stronger
Strong wind warnings for coastal waters area only

These short videos contain valuable safety information and tips - take a moment to watch these as they could just save your life.

MAST has partnered with Deckee, the all-in-one boating app.

The safety equipment required varies according to the length of the vessel and the operational area.